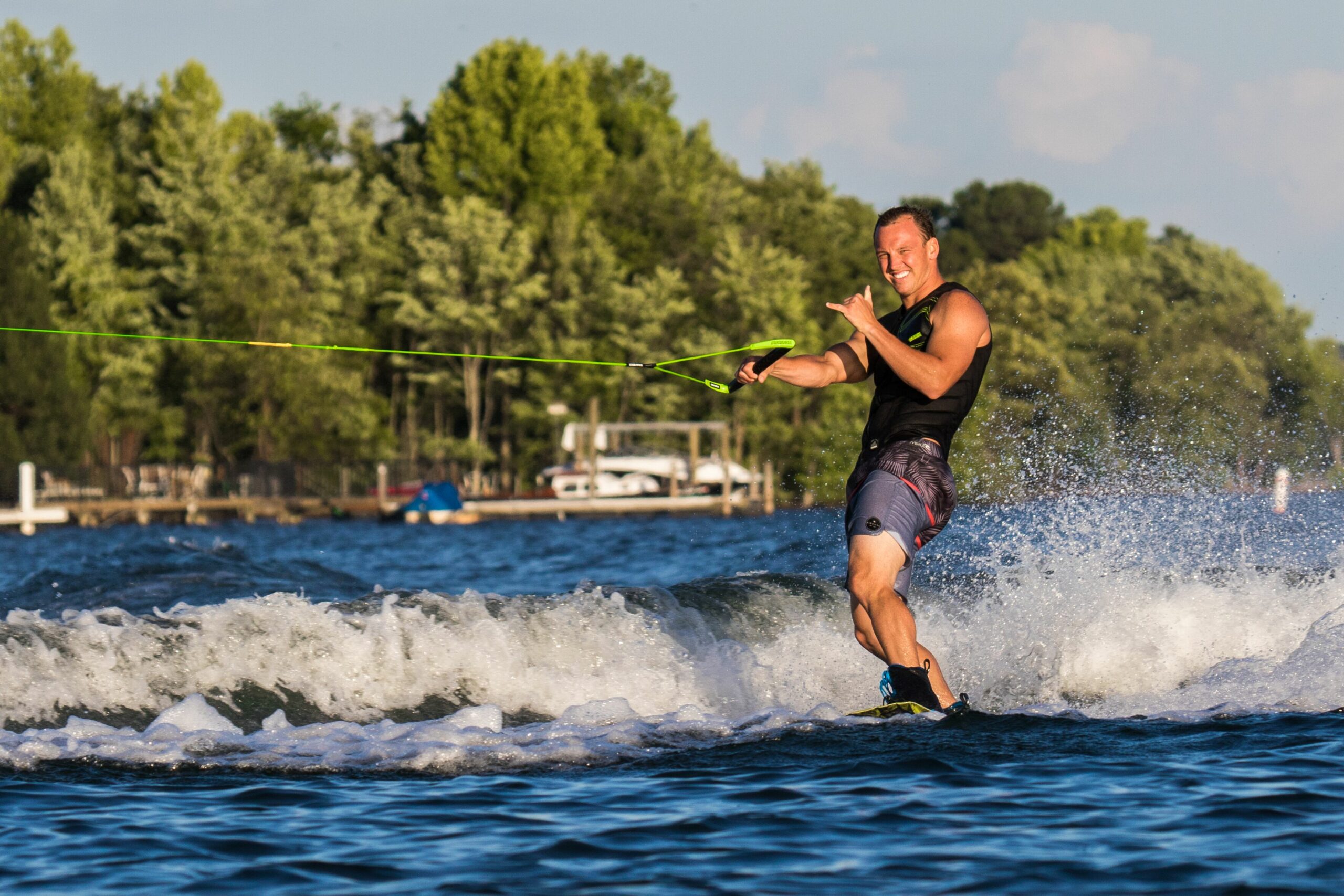 Lots of competition. A saturation of talent. Vast amounts of success, and ample failure.

Stephen Pierce knew what to expect in real estate after a seven-year career as a professional wakeboarder. He understood the rollercoaster of competition at the highest level, of continually working to improve yourself to keep at the top of your game.

“Having my background in wakeboarding helped me tremendously in overcoming certain obstacles my first year, especially just getting the right mindset going in,” Stephen says. “I was going to have to outwork my competition.”

Just as he did on his wakeboard, Stephen is establishing himself as a force to be reckoned with in real estate. At 27 years old and already established in a second career, Stephen has switched fields — but not the intensity of focus.

“I’m at a turning point in my life,” says Stephen, who is married now and has two sons. “It was just time, where I felt like there were a lot of new people coming into my wakeboarding world who were in their upper teens. It was just my time to move on and explore something new.”

Stephen moved to the Lake Norman area from San Diego at age 9 with his family. He has been living on the lake for nearly 20 years, and says, “I know the water better than the roads.” Ten years ago, at the beginning of his wakeboarding career, Stephen opened a wakeboarding school.

Instructing more than a thousand people on the water, Stephen began to build a network with which he had much in common. “They boat on Lake Norman, and they live this lifestyle,” he says. He learned business through trial and error teaching a sport he loves.

“That was very exciting,” Stephen says. “It taught me what to do and what not to do. How to be a good business person. Starting that business was one of my key points.”

Another key point for Stephen was aligning with a mentor. Stephen met Rich Tomasini, a seasoned realtor on the lake, early in his career. Stephen’s gifts for the trade were apparent right away to Rich.

“Stephen has a surplus of sincerity and drive that is evident immediately,” Rich says. “While a young man, he’s a father of two, husband, business owner, real estate phenom and manages this responsibility in a way few others 10 years his senior do.”

Stephen traveled the world as a wakeboarder. He saw lakes the world over and finds Lake Norman unique. “Other lakes have marinas, and you can boat on them,” he says, “but many lakes don’t have as many homes on the lake that are privately owned, right on the waterfront.”

Stephen sites seven restaurants on the water in a 20 minute boat ride. “You don’t get that anywhere else,” he says. Just as distinctive: Stephen’s understanding of the life, and ability to describe it in a way that resonates.

“It’s not just ‘this is a three-bed, two-bath home with 1,500 square feet,’” Stephen says. “It’s ‘this is a place that you will enjoy for years to come that has a staircase down to the water and a large beach where you’ll watch your kids play. You have a nice boat slip where you’ll take your boat out at your convenience.’ I really enjoy describing it like that and selling the lifestyle. That’s my passion.”

Not the younger set of wakeboarders who arrived on the scene near the end of Stephen’s career. It’s the proliferation of real estate agents on the lake. Good agents.

“Overcoming the fact that your sister might be a realtor is really hard,” Stephen says. “Getting into the game, there are so many successful agents jumping into the category I enjoy working in — which is waterfront properties — and it is quite competitive.”

It makes winning that much sweeter, he says. “That’s my biggest hurdle, but when I’m successful, it’s the most rewarding thing. It’s like winning a pro event. That feeling is great. It’s also totally different.”

Stephen has just started an LLC called Waterhaven Properties. He’d like to have his own team, pursuing the success he’s already tasted.

“Success to me is being happy with what you’ve created and where you are,” he says. “I wouldn’t put a monetary value to it. Being in a state in your life where you’re happy, healthy, enjoying all things around you is success on any level.”

Family life has been wonderful for Stephen. He and his wife, Faith, have two sons: Brecken, 3, and Baker, 10 months old. Brecken is the “24/7 superhero,” Stephen says. He’s into
T-ball and swimming. He’ll get on the lake this summer to learn to wakeboard. “His choice,” Stephen says.

Baker came into the Pierces’ life in the midst of the dawn of Stephen’s real estate career. He’s “a little firecracker,” Stephen says, a contrast to Brecken’s easygoing demeanor. “They enjoy each other,” Stephen says of his boys.

Faith is a stay-at-home mom with an entrepreneurial mindset. “We share ideas and help each other,” Stephen says.

Not even two years in, Stephen has big plans for his own real estate business and more expansive dreams in real estate.

“In the first year, it’s hard,” he says. “When you first start, you put your head down and go. Learn as much as you possibly can. The biggest thing: Search for a mentor. I’d attribute much of my success to that. I got a mentor, a top producer here at Lake Norman.”

It helps when that mentor knows what limitless potential you have.

“My imagination isn’t expansive enough to quantify what this guy can do in this lifetime,” Rich says. “Just expect big.”