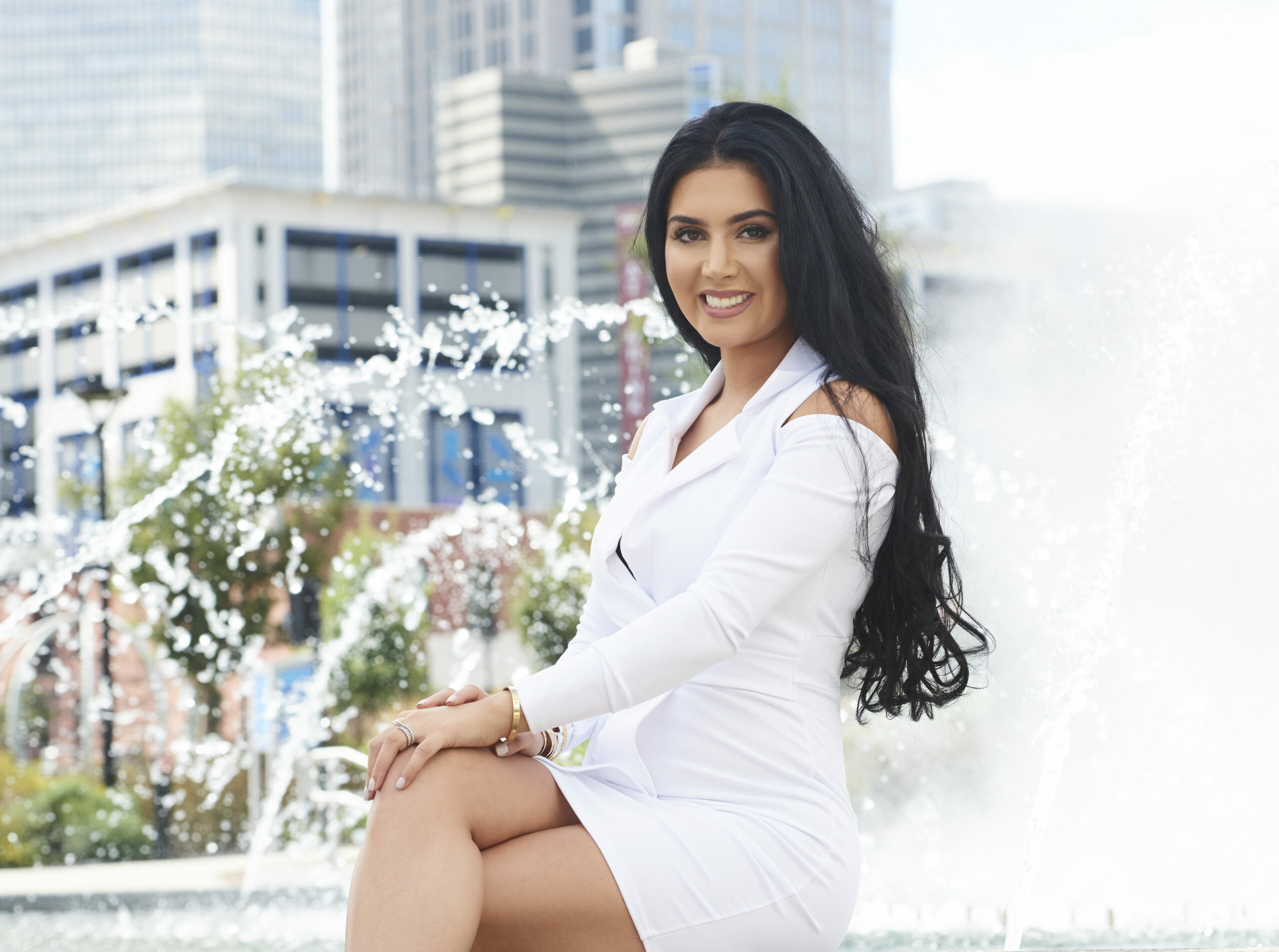 For Nilou Henderson with The McDevitt Agency, there are no strangers, just friends she hasn’t met yet. Warm and welcoming, she stopped to greet two ladies who were speaking her native language, Farsi, as she sat down to meet me at a coffee shop in South Park. Nilou and I were able to start our conversation easily, as if we were longtime friends. It was no surprise that this beautiful young lady is one of Charlotte’s quickly rising real estate stars!

Originally from Iran, Nilou was raised by her family in Bulgaria. In 1996, her family came to Chicago as refugees with a fantastic church group which enabled them to start a life in the United States. The “baby” of the family, Nilou has three sisters and one brother. From their travels, Nilou can speak three languages: Farsi, English, and some Arabic.

Moving from Chicago, Nilou spent her middle and high school years in Stafford, VA. After high school, she moved to Florida with her family where the ambitious woman obtained a job with Secure Watch LLC, a division of ADT. In the home protection market, Nilou learned the basics of cold calling and face-to-face sales, even at times working door to door to obtain new customers. Driven and talented, Nilou moved quickly up the ranks to become the only female regional sales manager for her territory in central Florida.

Successful and energetic, Secure Watch promoted Nilou to a larger
territory: North Carolina, South Carolina, and Georgia. However, the
travel was excessive, and soon she was seeking a career with more of a home base.

Property Management with Northwood Raven opened the doors for Nilou’s passion for real estate in the Queen City. She worked with The Lofts at Charleston Row and quickly learned to love helping others find new residences. She remained with the company through its acquisition by New Forum, and was promoted and asked to stay after the transition. However, Nilou had a calling to be more directly involved with her talents in real estate.

Nilou joined the team at Berkshire Hathaway as a real estate agent. With a young daughter, Nilou needed to be close to home and have the flexibility to grow her career as well as take care of her family. While pursuing a career in real estate, Nilou’s love of dance propelled her to try out and secure a spot as an NBA Cheerleader
for the Charlotte Hornets. What an incredible opportunity to showcase her talents in dance. Nilou had grown up learning various dance genres, and she cheered with the Hornets throughout 2014 and 2015.

Rising stars catapult quickly, and Nilou is no exception. The last three years have been a whirlwind. On April 28, 2017, Nilou became engaged to NBA player Gerald Henderson Jr. “My proposal was a total surprise,” says Nilou. “We were in the Bahamas, and Gerald proposed in a shark tank as we were wearing scuba gear. It was my first time scuba diving!” While in the tank taking in the experience, she looked up to see her family holding signs that said, “Will you marry me?”

Before their wedding, the couple had moved up to Philadelphia, as
Gerald has taken a spot on the Philly 76’ers. Not one to sit idle, Nilou worked in real estate while the couple was in Philly. After returning to Charlotte, the two tied the knot in Gerald’s hometown of Philadelphia in June of 2018.

Upon returning from Philly to Charlotte, Nilou was introduced to Shane McDevitt of The McDevitt Agency by friend and realtor, Kendall Phills. Nilou is now celebrating her one year anniversary with the firm as of September 2018.

Nilou’s momentum keeps pushing her star higher, and she keeps
bringing her “A” game. Within the last year, she has expanded her
reach into another passion of hers: interior design and staging homes. Her venture is called Stage of Designs (www.StageofDesigns.com). Nilou and, partner, Trinity Hoang
of Cachet Nail Salon, planned their launch party for October 6 at QC Social in Uptown Charlotte.

With so many balls in the air, Nilou still manages to keep grounded.
What is most rewarding about her career in real estate? “Being able to assist families relocating and being a full-service realtor is what I enjoy doing the most,” says Nilou. “From my experience as an NBA wife who has had to relocate, I understand the need to provide excellent service as well as confidentiality to my clients.”

Nilou loves to spend time with her family amid all this hustle and bustle. Her daughters, Roya, 9, and Zara, 2, are the couple’s pride and joy. The family also has a Pharaoh Hound named Chase. “I knew it was meant to be with Gerald as this was his dog originally and I loved he had a connection to my heritage.”

Wanting to give back to the community and people of Charlotte,
Nilou loves to volunteer. Her favorite charity is Safe Alliance. Safe Alliance helps women who are victims of domestic violence. Volunteering and helping others are a family activity with the Hendersons. Gerald sponsors the “Gerald Henderson Jr. Charity
Golf Invitational” (www.ghjrinvitational.com). An annual event, it was
held in Charlotte 2013- 2015. In 2016 and 2017, the event moved to Gerald’s hometown of Philadelphia.

With all the amazing things going on within Nilou’s life, she is always
able to remain grounded and a resource for others. With all her
talents, her essential key to success is her ability to connect with others and be a vessel to help them find their dreams in Charlotte, starting with their new home.

To reach Nilou, please give her a call at (704) 492-3426
or email her at nilou@themcdevittagency.com. Learn more at
www.nilousellscharlotte.com.