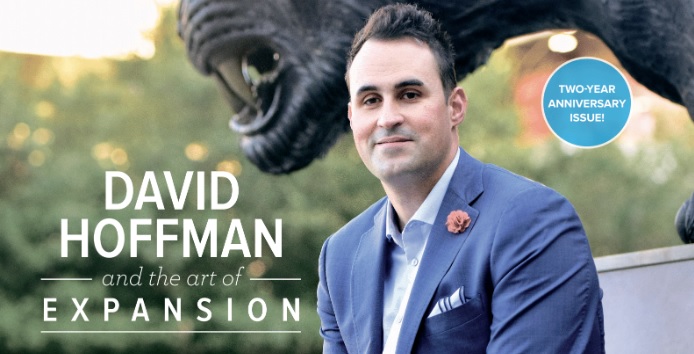 Forget being a star – David Hoffman is his own universe. Forever expanding with no end in sight, David is a force of energy all his own. We sat down with the 39-year-old mega producer and influencer to discuss faith, family, and how it felt to chug a bottle of hot sauce in front of a panel of judges while wearing a three-piece suit.

“Many people know that David Hoffman is a real estate mogul, but what many people may not know is that he is also a brilliant economist. With David personally leading the initiative, our team spends hours analyzing local and national market data to stay on top of trends. With David’s guidance, we can stay ahead of the market, which allows us to provide the highest level of service to our clients.” – DHG Team Leader, Katharine A. McFalls

Originally from New York, David Hoffman began his career as an economist. His work led him to Washington, D.C., where he was labeled an expert on the “Jock Tax” pertaining to professional athletes. Soon after, David decided to expand his expertise and growing interest in real estate and, in search of a fresh start, moved to the Queen City. He signed up with Allen Tate, where he remained for the next eight years.

In 2013, David launched The David Hoffman Group (DHG), selling 150 homes in his first year. With his intellect and drive, it’s no surprise. DHG currently operates 15 offices in nine states. One of Gary Keller’s “Expansion Pirates,” a select group of pioneers in expansion, David is also in Gary’s “Top 100” group, an ESO (Expansion Systems Orientation) instructor, a regular contributor to Inman News and Kw blog, and he helped write the Keller Williams course “Customer Experience.”

Fast-forward to present time, when David’s success has resulted in
him teaching his expertise through many channels: He is a national
public speaker, traveling to share his technique of building relationships; he’s authored many books and is a regular panelist on stage at real estate conferences throughout the nation; and he’s a seasoned guest on both local and national television and other media, such as ABC’s Nightline, Primetime with Diane Sawyer, FOX News, and The Wall Street Journal, among others. He recently traveled to Denver with Ryan Serhant from the hit show Million Dollar Listing, and he turned down his own Bravo television show, Welcome to Charlotte.

As if that weren’t enough, David also coaches some of the top agents on the planet. “I help them reach their personal and professional long-term goals, think ahead, even past next year, find balance at home, and apply standards to boost success. Health and wellness are so important,” he says.

Although David grew up in NYC, it’s no secret that he has a special love for the Queen City – even down to becoming a die-hard Panthers fan. “It’s refreshing and calming to be in the South,” says David. “My wife is from Salisbury. We’re rooted here, in both business and service, and I feel like I’ve lived here my whole life.” Having moved here knowing no one, he notes: “Charlotte truly is a blessing; people here give you opportunity.”

In 2014, David was honored as one of Charlotte Business Journal’s “40 under 40” for the Top Leaders in 16 counties throughout the region. “Do you want to hear a funny story about that?” Of course, we do. “They had a talent show at the event. I couldn’t think of anything to do, so I chugged a bottle of fiery hot ‘death scorpion’ hot sauce while wearing a three-piece suit. That was my talent – I’m
known for my love of hot sauce.”

How does one find the drive to not only accomplish all of this but to keep sharing it with the world? For starters, David and his family have strong roots in faith. They are members of the Forest Hill church, where David’s wife, Jessica, is a volunteer.

Secondly, and perhaps most importantly, David’s purpose and drive stem from the tragic event of losing his mother to Multiple Sclerosis
(MS), after being taken from her and growing up in a challenging environment, to say the least. “My mother’s MS was triggered by her pregnancy with me,” shares David. “My life was her sacrifice.”

David had a choice as to how to respond to these unfortunate events: He could become angry and internalize his pain, or break the chains, and expand and use it to do good for others. Thankfully, David chose the latter.

Perhaps this is why, no matter where he goes, David’s core focus is gratitude. “No matter what you do in life, it’s about giving more than you take,” says David.

This attitude manifests most significantly for David in his charity work. Last year, he partnered with Steve Smith, future Hall of Fame wide receiver from the Carolina Panthers, to organize a “Friendsraiser” to benefit the Steve Smith Family Foundation, and victims of domestic violence. “We held a silent auction at my house, and together we raised $22,000 in my living room, during a snowstorm,” says David, proudly. And, round two is coming up soon.

The remarkable thing about David is that he moves fluidly throughout many social circles. His clients and friends are NFL football players, celebrities, first-time homebuyers, WWE superstars, renters, teachers, stay-at-home moms and dads, and retirees, to name a few. “We don’t focus on any one specific type of person,” he says. “And we don’t take things off the calendar. We won’t move an appointment with a renter for the Governor or President. That’s our standard.”

There are three guiding principles within the DHG: 1) be the friend, 2) be the expert, and 3) be present. Thanks to his background, David views each situation as an economist. “We also look at everyone as family. I put myself in my clients’ shoes as if my wife and I are the homeowners.”

Speaking of family life, he and his wife, Jessica, have two sons: Kane, 5, and Knox, 2. “My boys are my little best friends,” says David. “Kane takes karate and loves getting new colors on his belt. And our little one loves to sing.” The family takes vacations each year – plus many “staycations” – and they make sure they take a vacation just as husband and wife. They make plenty of time for family and friends, and love going out to eat. In fact, David met Jessica at Del Frisco’s, while out celebrating Ric Flair’s 60th birthday.

As far as the industry goes, David notices the trend of moving toward technology and away from relationships – one in which he does not follow. “Real estate is emotional, and there are many moving parts,” says David. “Unfortunately the approach that many people take with real estate is sort of like Tinder: they swipe on a screen but ignore all the people that have already been placed in their life. And when you’re not focusing on relationships, everything becomes transactional, and nothing is special.”

David coaches his team to place relationships first as well. “What first impressed me about David was how much he truly cares about his clients, his team, and his community,” says Team Leader Katharine McFalls. “He encourages every person on his team to give selflessly of our time and talent. Giving more than we take is at the core of our corporate culture, and that is thanks to David’s leadership.”

The fact that the ladies of the “Success Team” at DHG recently presented David with the “Director of Dream Fulfillment” Award speaks volumes to how highly he is regarded among his team.

And, he has a playful, artsy side. David is known for his love
of boy bands – he even used to be in one years ago. “The
name of our band was Elev8,” shares David. “But we gave up
too soon; we were immature.” When asked if this was related
to Elevation Church, he says it was not. “Although I did help
ADVERSITY HAS BEEN A BLESSING FOR ME.” Steven and Holly (Furtick) sell their house,” he says with a smile.

As for inspirations, Allen Tate was a mentor to David before he passed away. Casey Crawford, head of Movement Mortgage, is both a dear friend and positive influence, and the two are working together on a pilot program. Gary Keller is also a mentor and coach, reminding David of the platform of God/Family/Business. “My wife and I read devotionals every morning,” says David. “My wife is the
most inspirational person in my life.”

He’s also currently working on sharing his life story in the form of a book. “The main message is to not let adversity be a crutch. Adversity has been a blessing for me,” says David.

David’s superpower, it seems, is to see the future. “I made a prediction on December 31, 2017, about this year’s economy, and it all came true,” he says – fortunately, or unfortunately, as some markets have slid.

So, what does David see for his future this year? “I want DHG to be
the gold standard for focusing on relationships. I want us to be in 100 cities in the next five years, to launch and grow a mortgage company, and to change the way that people are treated in the real estate process. I want to bring a new couple to church every Sunday. I also plan to not only be debt-free but to give back one million dollars per year personally, as well as in business. You know what – forget five years. It’ll be more like three years.”

We believe it. In fact, at the rate of his expansion, we’ve got our money on two years, tops.

You can reach David at
david@davidhoffmangroup.com.