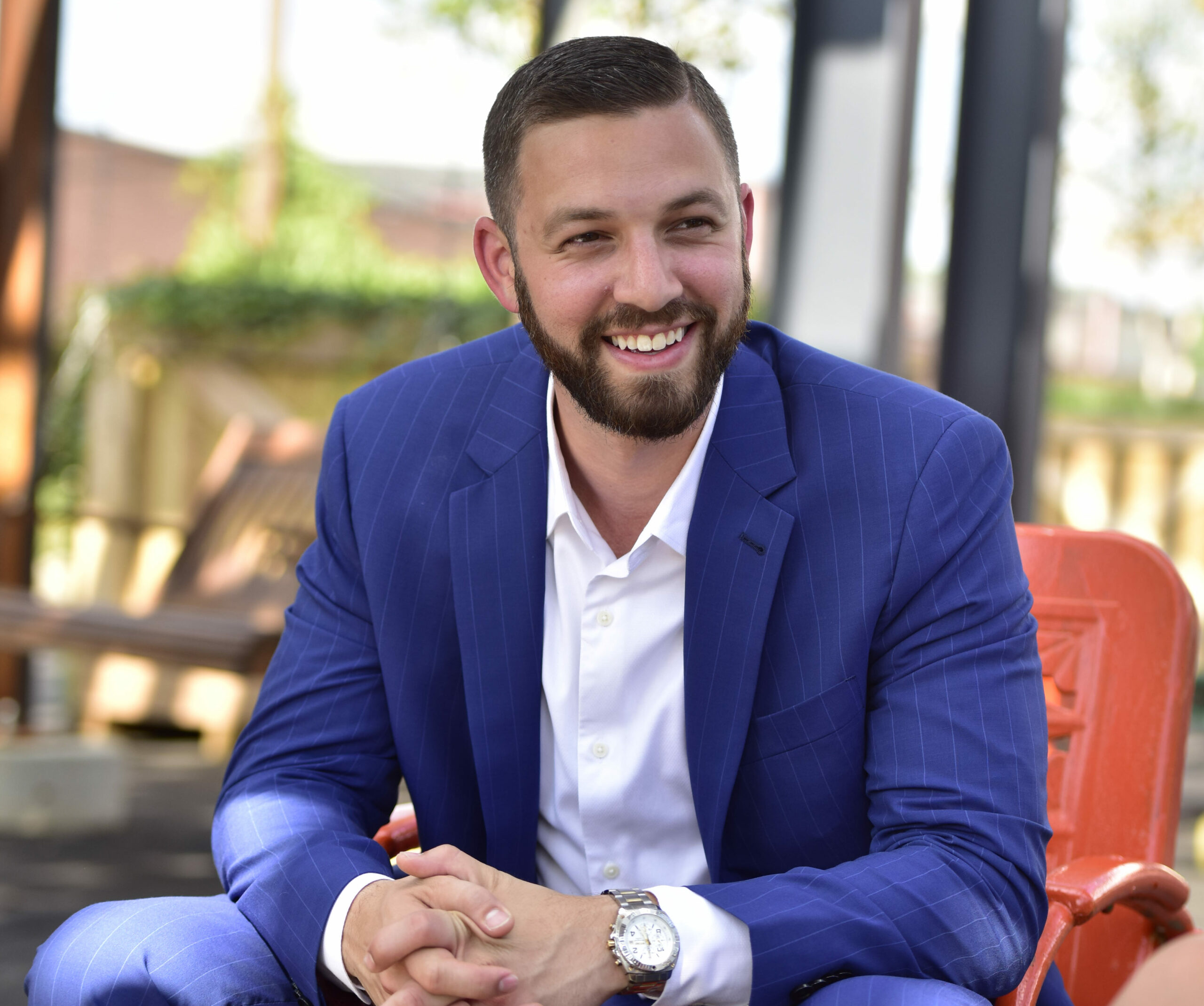 *Wikipedia defines Mensch
(Yiddish.mentsh) as “a person
of integrity and honor.”*

Clad in his signature blue pinstripe suit, Andy Griesinger’s first impression at our meeting was all that and more! In our conversation, I was able to discover the guy behind the suit: a hardworking, charming, talented young man making quite the impact in the Charlotte real estate market.

With his first-year volume at $6.7 million, Andy is following his heart as a “nice, trustworthy, Jewish fellow” and helping his clients find the home of their dreams. His sincere, honest work ethic has allowed him to sell 26 homes in his first year while “capping” at Keller Williams not once but twice in that time, as well as hitting many significant milestones within Team Lodestone.

Andy, born and raised in Bel Air, MD, credits a strong family foundation for shaping his path today. An active guy, Andy played lots of sports growing up and was heavily involved in music. His close-knit family spent every summer sailing around the Chesapeake Bay going on vacations for weeks at a time. They would travel around the Maryland Eastern Shore waterways, from Baltimore to Annapolis, to even a random night anchored out by themselves in the Bay. His father is a mechanical engineer, and his mother was a special education teacher at the elementary school that he and his brother attended while growing up. Andy has a special place in his heart for his mother. He shares, “I definitely took after my mother, who was a huge role model to me (as is my father). She was quite the social butterfly. She knew everyone in town, and everyone loved and respected her.”

Sadly, tragedy struck the family, but it made them all grow stronger as a result of it. “In high school, my mom was diagnosed with breast cancer,” confides Andy. “She beat it once, and it came back. Unfortunately, two months before I graduated from high school, she lost her battle with breast cancer and passed away. It was an incredibly life-changing and defining moment. We all had to grow up and mature fast. Right then was when I realized that I needed to be an integral part of my community, just like she was, and I’ve held true to that ever since.”

Moving forward with his mother’s courage alive in him, Andy went to Virginia Tech (VT) only a few months after her passing and immediately pledged Alpha Epsilon Pi. Andy studied Finance at VT and also focused heavily on developing his leadership and people skills. Andy worked within his fraternity chapter, leading it to grow to triple its size. He worked feverishly and became chapter president, and was awarded the Virginia Tech Fraternity President of the Year.

Because of his success within his fraternity chapter, Andy was approached by Alpha Epsilon Pi to become a traveling consultant, a job he enjoyed for about two years. “The opportunity enabled me to meet some of my best friends from all over the world and gave me an incredible chance to travel to 60-plus college campuses while working for AEPi, from Miami up to MIT and all the way over to Texas, Colorado, and even schools in Canada.”

Andy’s move into real estate stemmed from an ongoing interest. His grandfather was involved with real estate, but no one else was within his family. Andy followed his personal interest and found his own way. He started in Charlotte with Marcus & Millichap in commercial real estate. He soon found his true calling in residential real estate, which was when he joined forces with Team Lodestone at Keller Williams. Andy met Marissa Boyle of Team Lodestone when he was interviewing at different firms. He immediately sensed that working with her and having her mentor him as part of Team Lodestone would play an integral part in his success.

The pinstripe suit is pivotal in Andy’s career transition. “When I left my job at Alpha Epsilon Pi I bought four new suits: a blue, brown, grey, and a pinstripe suit. When I bought them, I promised myself the pinstripes would be my ‘closing suit’ that I’d only wear at closings for commercial real estate. Well, I worked for nine months at Marcus & Millichap with a grand total of zero sales, never getting the opportunity to wear the pinstripes. The suit sat in the closet for years, and when I joined Team Lodestone, I promised myself the same thing: that the pinstripes were strictly for closings.”

The “sales mensch” in Andy quickly propelled his success. He notes: “Getting to my first closing was quite a milestone for me personally since I was able to finally wear the pinstripes. I felt like I truly EARNED my stripes. I still hold myself to only wearing the pinstripes on closing days, which lately have been frequent enough that I bought myself a second pinstripe suit. So, it may sound funny, but it’s been incredibly rewarding to me to be able to wear the pinstripe suit, especially to wear it enough that I went out and bought a second set of stripes.”

The “mensch” quality truly embodies Andy and all that he is passionate about in the real estate market as well. “I’m passionate about surrounding myself with other people who have strong ambitions, lofty goals, and high integrity,” says Andy. “From business partners to clients, I truly believe there are enough people in Charlotte and in the real estate world that you can work with who you want to work with, and who you enjoy spending time with.” Andy credits joining Team Lodestone with Marissa Boyle as being inspirational to his success, as Marissa’s accolades are pivotal to creating a team of driven individuals with common goals and dreams.

His true reward is helping friends find their homes. “For my friends who’ve known me for years to trust me with the largest purchase of their lives is very humbling. The best feeling is when you take a buyer into a home after showing them a handful of potential homes and immediately you can see on their faces and feel in their energy that this home is their home.”

Andy admits that even amid his success, there are daily challenges. “Every realtor runs their business differently and will have different opinions of how things should be done. I’ve had to learn quickly that just because something works for one person doesn’t mean it will work for me, so I could build a solid foundation for my business in its first year.” He always pushes through even the toughest days. “Being a realtor is a great opportunity if you’re willing to put in the work, which is what I love about it. The idea is to work hard now so that I won’t have to work my entire life. I believe that real estate will offer many opportunities to take advantage of that long-term goal.”

As enthusiastic as Andy is about his professional life, he has the same zest for giving back to his community. Following his mother’s example, Andy is a volunteer at the Levine Jewish Community Center, where he is active with a group of young Jewish professionals as advisors for the local BBYO chapter (high school youth group). They go to the JCC weekly to hang out with the youth and advise them on chapter and personal issues. He is also actively working to build the Real Estate major at Virginia Tech by introducing students to Charlotte real estate professionals. A highlight for Andy was returning to VT to teach a class called “Careers in Real Estate.”

Andy values keeping in touch with his family in the Maryland area as well as other states. They enjoy traveling around the Chesapeake Bay area and the North Carolina coast. His family enjoys spending holidays together and traveling abroad, including trips to Ireland and Germany. “We are all very busy, but we try to stay in touch regularly and make sure we see each other for holidays and major occasions every year since my dad and brother are not living in Charlotte,” he shares.

During his spare time, Andy enjoys attending live music events and cheering for his favorite football teams. He is a big fan of both Virginia Tech and the Philadelphia Eagles, and even flew to Philly to watch them win the Super Bowl last year. What a thrill to experience the fanfare in the Eagles’ territory! Since graduating, Andy has attended multiple VT football games every season, most notably “The Battle at Bristol,” which was the largest attended college football game in history (157,000 fans). An upcoming adventure involves Andy’s favorite music group, the Zac Brown Band. He’s seen them in concert several times and has even met their writers. He plans to attend their all-inclusive trip to Mexico next year with some friends and clients.

With so many amazing things going on in Andy’s life, it’s hard to pin him down on one aspect of success. “Success is different for everyone,” says Andy. “To me, I still don’t feel like I’ve achieved everything I’ve set out to do. Success is hitting milestones you set for yourself and knowing you did it because of the hard work you put into achieving them.” He’d love to keep his “sales mensch” persona and also to be known as a person with a strong work ethic with a passion for helping people in his community. “I am passionate about truly getting to know people, helping them grow and supporting them along the way however I can.”

You can reach Andy by phone at 443-299-8946, or via email at andyg@kw.com. Learn more by visiting www.CharlottePerspective.comand
www.SalesMensch.com.